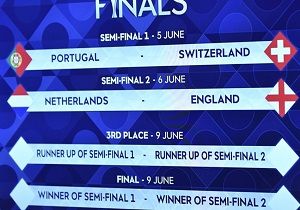 The Netherlands stand between England and a place in the inaugural UEFA Nations League Final after the draw for the semi-finals was made in Dublin. Hosts Portugal will face Switzerland and the matches and subsequent Final and third-placed game will be held next June.

England against Holland will be the first competitive meeting between the two nations since that never to be forgotten match in Euro `96 when England swamped the Dutch to win 4-1. However the two did meet in a friendly as recent as March when Gareth Southgate`s men won on Dutch soil for the first time since 1969 with a Jesse Lingard strike.

The game will be staged in Guimaraes on June 6th, the day after hosts Portugal play Switzerland in the other semi.

There`s obviously a lot of water to flow under many a bridge before then but all four nations can be optimistic about contesting the first ever UEFA Nations League Final, especially England for whom it will be an opportunity to claim only a second international football trophy.

The signs have been good for Gareth Southgate and his players starting with their achievement in reaching the semi-finals of this year`s World Cup and the progress of the England Under 21 side showing there`s an awful lot of strength in depth behind the senior team. We may even have the prospect of England using Under 21 players in their own age-group UEFA tournament AFTER the Nations League Finals which will be over on June 6th. Only 10 days before the Under 21 finals, yes, but there is no doubt that certain players will be able to compete in both tournaments, they would certainly want the opportunity should they get the chance.

If anyone doubts realistic hopes of England becoming the Nations` League`s first winners they only need refer back to the group stages of the competition. After picking up just a single point from their first two games England went to Spain and beat them, 3-2, before coming back from a goal down to defeat their World Cup conquerors Croatia to top the group and reach the last four. Remember England were facing the humiliation of relegation, with just 12 minutes remaining until goals from Jesse Lingard and Harry Kane earned that semi-final berth. But it was the manner of England`s win over Croatia that mattered.

In any sporting context to keep plugging away when all appears lost is perhaps the single most difficult factor in competitive sport but England dug deep, maintained their concentration and triumphed as a consequence.

There is very little to be read into the eight friendly fixtures between England and Holland that have taken place since 1996, not from the games themselves but in terms of the world order, perhaps there is.

Paradoxically the roles have been reversed in terms of the FIFA rankings. In 1996 the Netherlands were 6th and England 13th. On the day of the draw for the Nations League semis England were 5th while the Dutch were 14th.

It would seem the two footballing nations have been moving in opposite directions. Holland have not been the team they used to be, especially with their abject failure at international level, while England have been making progress upwards.

The emergence of real, quality players and young ones to boot with the massive plus of continuity, based on the age levels below the senior side, I think England should beat the Netherlands and in any final, especially at this kind of international level, anything can happen. In a sentence England are more than capable of beating any of the other three UEFA Nations League semi-finalists.

Portugal, who were drawn first out of the bowl in Dublin, go into their semi-final clash with Switzerland as reigning European champions. But they face a team that turned form and expectation on its head when they faced Belgium in the final group game. And with it issued a warning to their sceptics.

The Swiss came back from two goals down to beat FIFA World ranked number 1 Belgium by an incredible 5-2 score-line. That win came just days after Switzerland lost a friendly to world ranked 96th Qatar. The manner of the Swiss win over Belgium, in a one-off game, will give them massive confidence when they play the semi-final. It will also put massive doubts into Belgian minds, minds that make up a team that can be its own worst enemy, if things don`t go to plan.

There is little doubt that player for player Belgium has the most talented players to call on of any of the four semi-finalists, although by the time we get to June 2019 England will be pushing for that claim.

For hosts Portugal, who, lets face it, weren`t really on fire when they won the Euros, the biggest question, as always, centres on Ronaldo. Will he or won`t he? Revitalised by his move to Juventus there has been cynicism in certain quarters he may boycott the semi-finals, even though its on home soil, because he is miffed at being overlooked for UEFA`S best player award in favour of Luka Modric.

Whatever CR decides, and I doubt he will shun the opportunity to shine on his own turf, Portugal actually qualified for the semis without their most famous star. They will probably edge Switzerland in this semi but attitude will be paramount. Portugal have it, but it has to be a good day. Switzerland, as they proved against Belgium, can turn attitude on at will.

Prediction: It should be Portugal in the Final but the Swiss will not roll over. 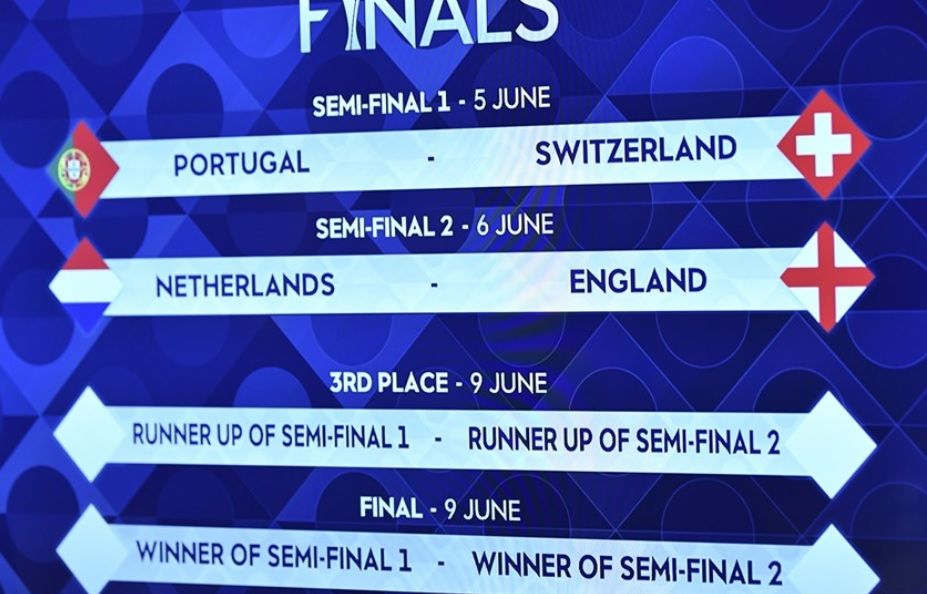