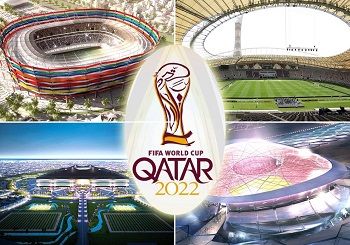 By the time the whole world was lapping up the 2018 World Cup in Russia the following tournament, Qatar 2022, had already disappeared from the news cycle. However, the intra-regional squabbling that saw diplomatic ties being severed between Qatar and its Arab neighbours: Saudi Arabia, Egypt, Bahrain and the UAE would not go away and continues to suggest it still has some way to run.

Even as Russia 2018 unfolded as arguably the best run, most organised and most watchable tournament of modern times everyone was talking about the bar being set so high with new standards. No pressure then on the Qatari drive to make their tournament four years hence even better.

No pressure, that is, until a whistle-stop Autumn tour of the Qatari preparations by Gianni Infantino saw the FIFA president throw out a quote which may come back to bite. He said.

“You can see the progress which is being made here ( in Qatar ) four years before kick-off. The Russia World Cup has been the best ever but the World Cup in 2022, in Qatar, I am sure will be even better.”

No pressure then but however political or factual Infantino`s statement is, Qatar is pushing on relentlessly as the smallest nation ever to host a World Cup and the first Middle East country to so do.

However I do think, like may others, that the FIFA president may have been overdoing the fawning when he suggested, at the end of a sentence when he stated the patently obvious of `the World Cup being important for the whole region`.

” The region has a passion for football.”

A bit over the top considering the lack of a meaningful and historic football infrastructure prior to the awarding of the 2022 World Cup.

The severing of diplomatic ties by several of Qatar`s neigbouring Arab states, ostensibly based on claims of alleged Qatari support for terrorism, does threaten the short and medium term approach to 2022. However, four years is a long time in politics in which to appease even the most extreme accusations which some regard as having a basis in jealousy at the awarding of the 2022 finals to Qatar in the first place.

The old chestnut of the tournament being switched elsewhere becomes less viable with each passing day even though there are still four years to go. I think the switching of the schedule from the normal summer time to a first ever winter tournament, straddling November and December, was a massive compromise for all parties concerned, and as such is perhaps as far a compromise as FIFA is willing to accept.

As for the infrastructure in Qatar, there was never any doubt that the oil and gas rich nation would fail to come up with the clout to stage the world`s premier international football tournament. Even recent fluctuations in oil prices, more down than up, which have impaired building progress, have failed to affect the schedule although the current cost of preparing for the 2022 finals, said to be around $500 million per week means the final cost will be way more than first anticipated.

Dubai`s high profile Security Chief, Lt General Dhahi Khalfan, even suggested the current crisis has been `manufactured`. He was quoted as saying;

” Qatar`s crisis will be over…because the crisis is created to get away from it.”

Asked to clarify his comments the security chief explained.

“I said Qatar is faking a crisis and claims it is besieged so it could get away from the burdens of building expensive sports facilities for the World Cup. That`s why Qatar is not ready and can`t host the next World Cup.”

The whiff of sour grapes grew even stronger when Lt General Khalfan suggested that the current blockade of Qatar was a means to an end. He stated;

“If the World Cup leaves Qatar then the Qatar crisis will be over.” Nothing suspicious there then?

It also came to light recently that a number of Western diplomats had privately stated their severe doubts whether or not the 2022 World Cup would take place in Qatar. However Qatar`s 2022 Supreme Committee for Delivery and Legacy has linked the author`s report, on which the aforementioned diplomats have seemingly based their assertion, back to the very countries who are blockading Qatar.

It is often, sadly, impossible to separate football/sport from politics but, something was proven in Russia just a few months ago. Once all the shenanigans and word games are over and the first kick-off diverts attention, rightly, on to the pitch, the football can do the talking. And if the football at Qatar 2022 is half as good as it was in Russia 2018 there won`t be too many complaints from REAL football people.