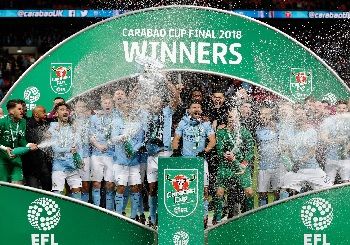 Manchester City will take this tie against Fulham in their stride. On paper there is only one winner but, as City are prone to display, on paper doesn`t always translate to `on the park`.

Where as many of the top teams field a shadow line-up for this competition City do not have a `shadow` line up. One of the major factors in the club`s pre-eminence is the paper-thin differential in quality their squad players have. Who ever gets a starting place is equally as able as the player he gets the nod over. Which translates, roughly, into, whichever line-up Pep puts out against Fulham is likely to be too strong for the visitors. With the Premier League campaign not going to plan Fulham will probably welcome a break with cup football until January.

Prediction: City to go through

On paper, again, there will be those who look on this as a clash between two clubs on a par rather than a team that climbed into the top six just a couple of points adrift from in-form Arsenal, and Spurs, hosting a team in the Championship top 10.

Interestingly the Canaries only consistency seems to be in matching their goals scored column with the goals against. They are the only team in the top half of the second tier with a negative Goals Difference.

Only Arsenal, Chelsea and Manchester City scored more goals before the second international break of the season than Eddie Howe`s team whose free flowing side smashed four past Leicester and Watford, away.

Retaining their top flight status has seen Bournemouth`s players grow in confidence and they are now conducting themselves on the field with the demeanour they belong there instead of the overawed approach which sometimes reared its head, especially against the bigger clubs.

Sorry but even without the winning streak Arsenal enjoyed after a shaky start to their Premier League season this has to be a home banker. Yes, there is always the chance of an upset in cup competition but, like Manchester City, Arsenal have too much quality in reserve, especially youngsters bursting at the seams to demand their chance, to let this one slip. Unai Emery has even managed to get the best out of pairing Pierre -Emerick Aubameyang and Alexandre Lacazette up front, something I felt was never going to happen. That, along with getting the Gunners to play like a team, is probably the new coach `s biggest achievement thus far.

Blackpool started autumn wallowing in mid-table with a seeming inability to turn draws, seven out of 11 games won them just a single point and an average of a goal scored per game is hardly likely to see the scoreboard at the Emirates working overtime or the Arsenal defence.

Another plum tie for Chelsea legend Frank Lampard, however when Derby dumped Manchester United in the last round the Reds were already in terminal decline without a heart and with no soul either. The Rams will not find an in-form Chelsea quite as generous. But then again no one thought, go on they honestly didn`t, the Rams would triumph over United. I doubt lightning will strike twice and I cannot see the whatever star-studded line up Maurizio Sarri puts out failing to give hero of the penalty shoot-out triumph in the previous round, Scott Carson, anything but a testing night.

Eden Hazard has started the season on fire and, if he plays, which is by no means a foregone conclusion, it will be an education for the Derby players. If he doesn`t then there is far too much strength in depth to prevent Chelsea from making it into the next round.

Prediction: Chelsea to ease their way through but whoever dons the blue shirt will have to work hard to impose Premier League skill. A less than appropriate attitude could hand Derby an advantage

Who says the draw for cup competitions has no sense of irony. There certainly is a sense of humour that sees Nigel Clough, who won this competition twice as a Forest player, planning the downfall of a club EVERYONE in football knows he will manage sooner rather than later. Indeed when he was linked with the City Ground job last October he was quoted as saying he `wasn`t ready` but did not rule out taking on a job that has ` a lot of emotional attachment, sometime in the future`.

Right now, despite Forest`s excellent showing in the Championship going into the international break, knocking on the play-off places in 5th, although Burton may be struggling in League One after relegation they have got a real chance of beating their near neighbours. When they hosted a far superior team on paper recently, in the league, Sunderland, Burton showed a desire that may well take them past a Forest side which is looking good in the Championship.

The Pirelli Stadium is tailor-made, compact and `in-yer-face` to provide a stern test for any visiting side, as Premier League Burnley found out in the least round.

Prediction: Burton Albion to go through

A case of Claude Puel hosting his former club which he led to the final of this competition just over a year ago. Looking for clues as to how this one may go is not easy but perhaps the most significant angle is the difference between goals scored for each team, home and away.

Leicester have a plus goal difference at the King Power Stadium while Southampton do not travel at all well. A minus 4 goal difference going into the international break was a consequence of just one win on the road and three defeats. The Foxes do not seem to have much trouble finding the net, 14 goals coming in the league by October while Southampton`s four Premier League away games yielded just three.

But this is a cup tie and attitude is paramount. I think Leicester`s front-foot football, especially with Jamey Vardy ravenous against any defence that lacks pace, allied to home advantage will prove key.

The Hammers will fancy their chances against London neighbours Spurs whose attention is likely to be elsewhere, on the league and Europe. Add to their approach that Manuel Pellegrini has actually got reluctant Hammers` players earning their money at long last and West Ham could turn Spurs over. That being said Spurs have the best away record in the Premier League and, along with Arsenal, are the only side to be in double figures for goals on the road.

That leaves a fascinating clash in prospect with individual battles all over the park. Neither defence inspires confidence so with Harry Kane v West Ham`s statuesque back-line and Marco Arnautovic relishing the physical approach of testing the Spurs rearguard this tie could be a goal-fest.

I have a hunch that if it comes down to a scrap it will be a game won by whichever set of players is more up for it, which is exactly what a cup-tie should be.

Prediction: Spurs to edge it by the odd goal

Another example of a home manager hosting his former club. Boro`s Tony Pulis breathed fire into Palace and not only maintained his record of never being relegated he also took Palace to their highest Premier League finish, 11th in 2014. Now he is steering Middlesbrough back towards the Premier League as Boro are amongst the play-off places a quarter of the way through the season.

Wise old sage Roy Hodgson always seems to be trying to do his King Canute impression by getting Palace away from Palace`s reliance on Wilfried Zaha.

Boro have an excellent home record and have only conceded two goals at the Riverside all season while Palace will be grateful this is an away tie as they are poor at home.

If both sides field full-strength line-ups it could be a close run tie. If Palace rest too many first choice stars its for sure that Tony Pulis will use that to motivate his team selection and progress.

Prediction: I go for Boro