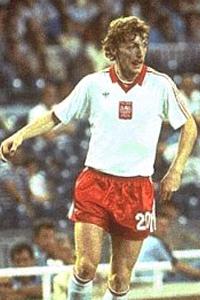 Zbigniew “Zibi” Boniek, born in Bydgoszcz, is one of the greatest Eastern European players ever. He started his career in his birth town club Zawisza before moving to one of the great Polish clubs, Widzew Lodz. Boniek was included in Poland’s 1978 World Cup squad as a 22-year-old and impressed many with his tireless running and commitment. Poland reached the second phase before being knocked out by Brazil and eventual winners Argentina.

Four years later in Spain, Poland had a better team and Boniek was excellent as his country won bronze medal. Arguably his best performance of his career for Poland came in a second phase match against Belgium where he scored a magnificent hat-trick. One of the best hat-tricks in World Cup history. Unfortunately he was suspended in the semifinal against Italy, but he was back at his best when Poland beat France in the bronze match. Zibi was definitely one of the greatest stars in the tournament and appeared on many “Dream teams” in papers and magazines in the wake of the World Cup.

Boniek took the big step to the Italian Serie A before the start of the 1982/83 season. Along with fellow newcomer Michel Platini and World Cup winning hero Paolo Rossi, Zibi formed a deadly attack in Juventus which would conquer Italian, European and world soccer. The team won the league and cup in Italy plus the Cup Winner’s Cup (1984), European Super Cup (1984) and European Cup in the tragic Heysel final in 1985, all in the space of three seasons. President Agnelli nicknamed him “Bello di Notte” (Night Beauty) as he always seemed to play his best during evening matches.

Zibi left Juve a year before the 1986 World Cup and joined AS Roma where he won another Italian Cup winner’s medal. He now operated deeper and played as a sweeper for the Polish team in the Mexico World Cup. Poland, not anywhere near the force they were in 82 or 74, reached the second round, but lost heavily to Brazil. Today Zbigniew Boniek works as a commentator for a TV channel in Poland.